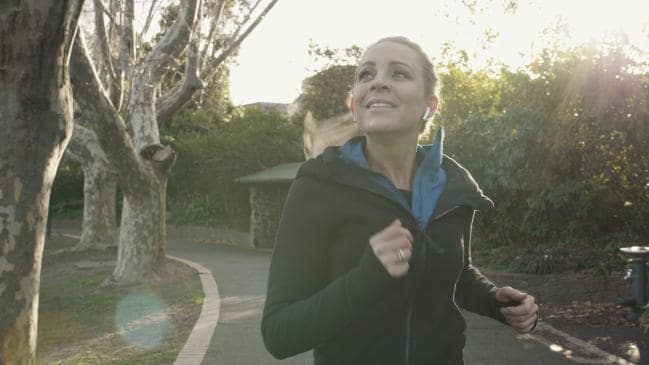 Speaking to Carrie Bickmore is like chatting to an old friend, albeit one I’m meeting for the first time, over the phone, with a PR listening in for good measure. How’s that for weird? Maybe it’s because I’m used to Bickmore being in my living room four nights a week via The Project. Or maybe because she’s just so darn likeable.

I recently had the pleasure to talk to the mum of three and Blackmores Sydney Running Festival ambassador about her prep for the upcoming Bridge Run in Sydney, and she uttered the phrase ‘to be honest’ no less than five times. And that’s just what you get from her – honesty.

Keen to understand how she balances training for not only the 10 kilometre Bridge Run, but also the Point to Pinnacle half marathon (a 21 kilometre climb up Tasmania’s Mount Wellington – ergh!) with work, family and everything else, I quizzed Carrie on the realities of running after baby, giving up on scheduling and the guilty TV pleasure that convinced me we were, in fact, bffs.

The Blackmores guys said ‘Do you want to take part in the Sydney Running Festival?’ I’m one of those people who are very goal oriented so I was like ‘Yeah!’ I need little goals, and this is the perfect way to get involved, to get back into running, and I thought that I needed something to train towards…! [laughs]

On the realities of running post-baby

I haven’t run in along in a long time. When I had Addie I had pretty major pelvic issues, and I could barely walk, to be honest, and so getting back into exercise now, I’ve taken it so slowly and really been gentle with my body and making sure that I don’t push it.

Because I’ve had lots of pregnancies, I’ve had issues – you know particularly with the female reproductive parts, post-baby. I’m pretty bad at doing pelvic floor [exercises] and things like that, so I’ve taken it very, very slowly coming back into it. I’ve been walking for months and months and months, and only then slowly, only after seeing a physio, have started to get into running. So I actually am still a little daunted about the 10Ks because it’s been a long time since I’ve done 10Ks straight, in one go.

On healing her pelvic floor

I am terrible at doing my pelvic floor at the best of times, but I also realised I was doing them wrong. I was with the physio and she was saying ‘This is how long you have to long them in’ and ‘these are the muscles you should use’ and all of those things. I’m not going to pretend I’m perfect at doing those things, and I still have weeks when I completely forget to do it, but I’m much more aware now.

On fitting fitness into her busy mum-life

I’m not obsessive about it, at all. I’ve also just become someone who doesn’t think about and just does it. Because… there’s already so much organisational stuff in my week as it is – with work, school activities, sport stuff on the weekend, all of that.. once I schedule all of that in there’s not a heap of time left for me. So if I’ve got a 20 minute window between things, and Chris is home I’ll say ‘Hey hun, can you stay with the kids? I’m going for a quick run.’

He’s also training to compete, and so then he’ll do the same a bit later in the afternoon… I really love training with friends, so a few of us will get together on the weekends – and then I kill two birds with one stone. I grab the moments, rather than add it as another thing that I have to schedule because it’s a bit overwhelming.

On her perfect week of exercise

I’m trying to go for one long, about eight K run on the weekend… I’ve only just gotten to the point I can do that without stopping too much. I’ll try to get a Pilates class in on the weekend too, and then I try to go for a massive walk with a couple of friends – for an hour and half or two hours – to help with my legs, especially if it’s after the day that I’ve been running I notice that my body’s a bit sorer – my knees and my ankles are quite niggly. So I try to walk off those niggles.

Then during the week is a lot harder, because in the morning I’m with the kids so sometimes I’ll put Addie in the pram and go for an hour and half walk, or I’ll say to Chris ‘Can you just stay home for an extra 20 minutes?’ and I’ll duck out for a five K run first thing. So I try to do one thing during the week, then on the weekends – Friday, Saturday, Sunday – I try to get in something each day. But, depending on what life throws at me, that can all change.

On the power of saying no

I’m trying to say ‘no’ a lot more, and I’m also trying to slow down a bit. I live life at a pretty hectic pace, and I always have… but the busier I get and the more kids I have – I’ve noticed that my body’s not quite keeping up and my mind’s not quite keeping up, and I’m just more tired. I’m trying to be more gentle myself and say ‘You know what? Just stop. Just listen to your body when you’re tired.’ And I will just stop, and just catch an episode of Younger – which is my latest addiction. Even if it’s only for 20 minutes and then it’s like ‘Ah! The world’s ok again’. And then I can go back to the cooking or the cleaning, or whatever it was that I was doing. It’s really hard. If someone’s got the secret to [managing the juggle], I’d love to know! But I certainly don’t.

On her surprising TV guilty pleasure

Oh, I love Younger! Last night I was up all night with my daughter, because she has a cold, and normally that would be the worst thing, but I was like “You know what, who cares?’ I could just watch back-to-back episodes of Younger without being interrupted!

On her ‘old lady’ morning ritual

Something my Mum always used to do growing up, and my Nan too, and it’s such an old lady thing – but now I’ve adopted and now I can’t start my day without it – is a cup of tea. It’s such a simple thing… There’s something about the act of sipping something out of a beautiful little porcelain cup as the chaos of the morning begins with the kids that weirdly sets me up for the day… I now realise why it was such an important part of my Mum’s life, because it doesn’t cost anything – it’s just for me. It’s a really simple little thing I do.

The other thing I try to do a lot more is disconnect from my phone. I’m really bad at it, because I’m – like most of us – obsessed with my phone. I used to find that when I get home from work and I do all of my catching up on work, quickly texting all the people back that I didn’t get a chance to during the day, catching up on the news, I realised I wasn’t spending any time to hang with Chris… and then I was going to bed with a to-do list in my head that was a million miles long and I was quite ‘on’. I’m still not perfect at it, but I’m just trying to get off my phone a bit before bed so that I’m in a better headspace.

I think, just doing things, and not thinking about them too much is important. I think as women, everybody else’s priorities are more important than our own – and so if we actually had to think about when we get the time we get to ourselves – we’d find a whole lot of reasons to do things for other people first. So I think the more we can quickly act on those thoughts of ‘I feel like going for a run now’ or ‘Oh, I should grab a smoothie,’ or some vitamins, or whatever it is that we think will make us feel better, rather than adding it to a list of things to do later – the better. We should just do it.

On the joy of Nutella

I think we should just be a lot kinder to ourselves. I think, as we get older our bodies don’t quite work the same…we’re busier, and just think if we could accept that we have good days and bad days, and weeks where we’re a lot more active and then weeks where we spend too time sitting on the couch.

Same with what we eat… I’m not obsessive about what I eat at all. I’m not someone who has ‘treat days’ or anything like that, I definitely eat pretty well – generally throughout the week – and then if I want a jar of Nutella, I have it. I mean, I wouldn’t do a whole jar… but I’ve been known to at times in my life! [laughs] I’d sit on the couch with a jar of Nutella. I just think we could all do with taking the pressure off ourselves a little bit, and being kinder to ourselves.

For more information about Blackmores head to here.