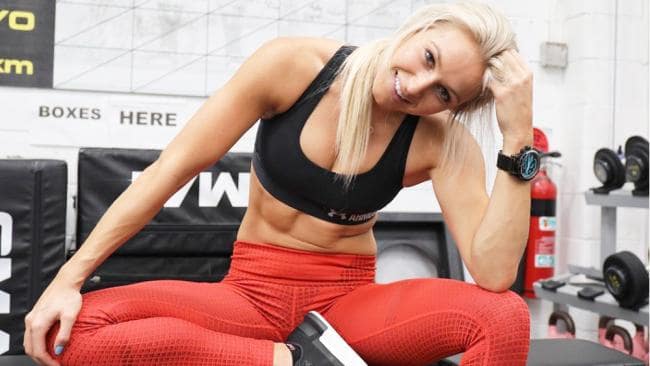 We’re not going to lie. Having a defined stomach is something we’ve always thought about, tried to achieve and then given up because a bottle of wine and a bowl of carbs are just too good to pass on. But what if in the perfect world getting that chiselled six-pack without having to do endless crunches or giving up on your favourite foods was, in actual fact, very possible?

According to Australian freestyle skier Danielle Scott (who FYI, is known for her ripped abs), this impossible is actually very possible.

“My friends have always said ‘take me to the gym and give me some tips’ because for women, it’s nice to have a flat stomach with a bit of definition,” Scott tells myBody+Soul in an exclusive interview.

The Under Armour athlete says that instead of performing endless crunches, we should be focusing on moving the oblique muscles more, which will end up working your entire core.

“I think everyone gets caught up in doing these forward-and-back core exercises – your sit ups, your crunches, your toe touches – and you kind of forget to do the side twisting motions.”

Examples of exercises would be bicycles with the sit up performed on an angle, or standing with weights in either hand and slightly bending side by side.

“It doesn’t have to be taxing, but you just need to switch on those core muscles in a different way that then brings out the definition.

And contrary to the belief, when it comes to diet, the key to abs isn’t keto, intermittent fasting, low calorie or low carb. If anything, carbs are the answer to a flat tummy.

“Carbs are totally fine, and the way I look at it is as an athlete, I’m fuelling by body. I’m not conscious of how much I put in because if I’m energised, then I can put in that work and I can get out the performance.”

For Scott, she fuels her body with a plant-based diet, which consists of plenty of nourishing carbs, protein, healthy fats and chocolate. Yes, chocolate.

“I definitely feel a lot lighter and more energetic on a plant-based diet, and my body can process that nutrition in those foods as opposed to heavier amounts of meat and dairy,” the 29-year-old explains. “And at the moment, I’m the strongest I’ve ever been.”

Here’s what a typical day on a plate looks like.

Breakfast: Bowl of cereal with homemade muesli, almond milk and coconut yoghurt/vegemite with avocado on toast with an egg, or two, for protein.

Snacks: A trail mix of nuts and dried fruit/YoPro yoghurt.

Dessert: Anything with chocolate/Weiss bar.

“Learning to relax is a massive part of mental health and it’s easy to forget about it,” the professional skier adds. “We train so hard in the gym and we push out nutrition to its limits, but we completely forget about our minds.”

Among her busy daily schedule, Scott ensures she fits in time to let her body rest and mind completely relax.

“For me, it’s the breathing and relaxation, but also going and doing something completely different. It’s going for a walk and taking my camera to get some cool pictures, or hanging out with friends.

“I have these audio recordings that my mental performance coach has given me so I’ll listen to these with a slow, relaxed breathing, and just listening to that audio and the words she’s giving me is my time to just zone into my mind and not worry about anything else.”

So, bottom line: “Eat what you like, keep active and don’t worry about it because the moment you start worrying about it, it becomes too difficult to control.” Amen Scott, Amen.