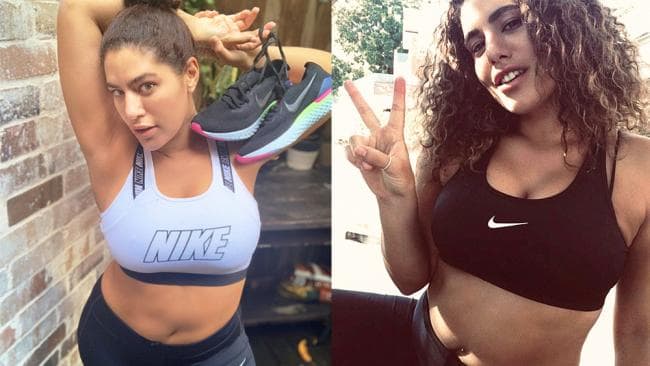 Before you ask, no, I’m not running to lose weight.

To get fitter? Yes. Healthier? Yes. Tone up? Sure. But to strain my body into a shape it does not want to naturally become? That’s a hard no from me.

You see, I like my curves—as a model I’ve actually made a bit of coin with my ample bust and butt—but I will admit, there was a time (roughly two months ago) where I thought being a long distance runner was pretty well out of the question for me.

But I was wrong.

I’m currently training for Run Melbourne’s 21km half-marathon in July, a challenge I never expected I’d be doing. But equally surprising, I never expected that something so simple as taking up running would transform my lifestyle in so many ways…

I’m going to be very honest when I say 10 weeks ago when I started my running campaign, I could not comfortably run for 10 minutes. I mean, as a low-key exercise person, I could run. But I did not enjoy it at all. Each step felt painful and tedious and the thought of a circuit class including a treadmill section just filled me with dread.

But that was before I was introduced to Dave Ridley, marathoner and running coach for the Melbourne Nike Run Club.

It was mid-March and I was chatting to Dave on the phone when the magnitude of what I was signing up for began to dawn on me.

‘What the hell am I doing?’ I wondered to myself. ‘I’m no runner!’ Little did I know, overcoming this negative self-talk in that moment was the actual start of my training.

Probably sensing the nerves, and being an expert at coxing people onto a starting line, Dave calmly assured me that the marathon mission we were about to embark on was entirely doable.

“This is going to be slow,” he told me. “You might think it’s too slow. But it’s all a part of running smart”.

Dave told me not to think about the running, that was his job, my job: “Just do it.”

2. Enjoying every accomplishment (no matter how small)

Dave was right. He did start me off slow. Because I was already a walker—I’d walk about 5km every day—he had me do some interval training three times a week on top of that. First week I’d have to walk steadily for 10 minutes then add some gentle pick up runs; about 30 seconds of jogging five times, with 1-2 minute breaks between. Might not sound tough but you better believe it got me moving and I remember the enormous feeling of accomplishment when I did the first week of training. You’d have thought I’d just finished the New York Marathon.

Look, I can’t say that I bound out of bed each day excited about a run. While I feel like I can now comfortably put away a 40 minute effort, there are parts of it that really challenge my motivation. But running doesn’t have to be a solo sport.

For many of us, our training mates—those friends who send us passive aggressive texts when we dog a 5am spin class—are a BIG reason we get out of bed and get moving. In fact, a 2017 MIT study, published in the journal Nature Communications, found that apart from general peer pressure, sharing our fitness results with our friends actually pushes us to work out even harder and more often.

4. Being part of the gang

Knowing that exercise is a social contagion, the Nike+ Run Club (NRC) app has been developed to create an online community. For me, it’s a place where I can find some extra motivation with audio guided runs from world class trainers like Coach Chris Bennett, a marathoner and NRC pioneer, but also celebrity athletes like Kevin Hart and Manal Rostom; I recently ran 4.3kms with Kevin yapping in my ear holes and LOL, it was a fun 35 minutes.

For me, the practice of sharing your runs feels like you have a community of runners celebrating your wins every time you hit a milestone.

While I started this by saying I had no intention of running for the sole benefit of pushing my body to become a shadow of itself, I’m not ashamed to admit that I love the tone and strength running has brought to my body—especially how it seems to be shaping my butt. Beyond that, I feel fitter and excited about how much healthier I can get.

Delightfully, running is an activity that requires minimal equipment. Typically I’m always that girl turning up to yoga without a mat and if I don’t get the right reformer machine near the fan, I’m not excited about doing pilates or 45 minutes. But, when it comes to running I really just need two things: a good bra, and good shoes. The latter I cannot stress enough.

After weeks of running, I realised one pair of shoes wasn’t going to be enough. Speaking to other runners it became clear that rotating between multiple pairs of different shoes was the way to go if you planned on doing serious kms. The main benefit of this is switching up? It changes how your foot is stressed every day so this means you’re risking less injury.

In my sneaker collection my current go-tos are my Nike Epic React Flyknit 2s. They have that long lasting foam technology, giving me the cushioning to do more and go farther. On the other hand, these are complimented by my intuitive Nike Free 5.0s. These are based on the foot itself and are free-er than before—ground hugging cushioning with a lower, more neutral offset they allow my foot to extend itself in a full range of motion.

“The Nike Free 5.0 isn’t meant for every workout,” says Nike’s Director of Advanced Footwear Innovation, Ernest Kim says of the shoe. “It’s ultimately a matter of preference, and many elite athletes will use the Nike Free as a shoe for warm ups and cool-downs, as well as gym strength-training workouts and shorter runs.”

Getting out of your comfort zone

Pushing your own physical and mental limits is tough, especially with fitness because it can leave you feeling very vulnerable. What if you fail? Well, I’m going to share with you something that Coach Bennett said to be on a guided NRC app run when I was feeling particularly fragile: “Being afraid to fail is okay, because all it means is you care.”

For that reason, no one should be ashamed to be caught caring. Especially when it comes to caring about their health.

But getting out of your comfort zone means you should set yourself up for success, and a big part of accomplishing your goals is by being honest with yourself about what you can, and can’t do.

My five out of 10 effort is not the same as Mo Farah’s five out of 10 (whose is?), but my five is not the same as my two, or my seven or my eight. The point is, if I’m not being honest about the effort how I can get better? I’m training myself to know that if I can give more, I have to give more, if I need to ease up then I need to respect that too.

These past few months running I think I’ve been the most honest about my fitness I’ve ever been and that’s really how I know I’m getting better.

While you might just want to obsess over what running does to your abs, there’s another muscle it helps fire up too: your brain.

A widely cited 2018 study from West Michigan University showed that just 30 minutes of running at a decent intensity improves the bodies ‘cortical flicker frequency’ threshold; this is associated with your brain’s ability to process and absorb information.

So basically, it’s a genius idea to run!

You might have heard of the ‘runner’s high’ but picking up the pace can also help you battle mental lows. Researchers from Princeton University found that running “reorganises the brain to be more resilient to stress” because it creates new neurons in the hippocampus, aka, the region of the brain shown to regulate anxiety.

12. Running has made me drink less

For all the sweat and challenges there’s so many mental benefits to going for a run. So when I started to feel my Saturday morning energy zapped from too many Friday night vinos I decided that I enjoyed running more that the booze buzz.

Now, even though I wasn’t a big drinker to start with, I feel like I’ve accidentally given up drinking and I’m not mad.

As humans, we get most of our vitamin D from sun exposure and, while it might seem ludicrous, in sunny Australia we do have an issue with vitamin D deficiency.

According to a University of Sydney study of more than 24,000 people, up to 58 per cent of Australians are deficient in vita D. The cause? Long work hours and the comfort of the indoors means many are unaware of much time they’re actually spending inside, away from the great outdoors.

A remedy could be doing a daily bit of exercise, like a run, outside where you can help boost your vitamin levels that may help ward off depression, prevent type 2 diabetes, and strengthen your bones.

Look, I’ll be frank here and say running does improve your stamina, and your stamina certainly improves your sex life. It’s TRUE! Don’t @ me.

15. You can run anywhere

“You have brains in your head. You have feet in your shoes. You can steer yourself any direction you choose.”—Dr. Seuss said that, and y’know what, he was right.

Personally, as someone who travels a lot, I’m stoked I’m at the point where my workouts aren’t ruined by a weekend away because I can be flexible with when and where I get a jog in. Jet-lagged at 2am in the hotel gym, anyone?

16. There’s not just one kind of running body

Okay, maybe you reckon you’re too unfit to run. Maybe you’re calling yourself too short or too fat. Well, after two months of training, I can tell you you can forget that BS. What does a “real” runner’s body look like? It’s simple: it’s someone who gets out there and runs.

Nowadays, the idea that my thick and strong body will eventually carry me over the finish line excites me! And commitment is the same as what I promised coach Dave when I started this whole adventure. I’ve just got to stick to my job and… just do it!

Jessica Vander Leahy is a model, writer and new runner. She’s going to be running at Run Melbourne in July with the help of #NikeRunning and you can follow her journey on the Nike+ Run Club app.